The 3 new iPhone 11 models will be camera-focused

The iPhone 11 launch date has been set now: it’s going to be September 10 in Cupertino, now the invites have gone out – and we could be getting not just the iPhone 11, but a new iPhone 11 Pro.

We are not sure how that is going to play out – as the leaks are currently suggesting that the likely three new phones (including something we are colloquially dubbing the iPhone 11R, although it isn’t clear if that would be the name) and the changes on each of the new iPhone models seem pretty minimal since 2018’s devices emerged.

If you are hoping for a massively-upgraded handset, then you are probably going to be disappointed this year as the upgrades that we’re hearing about aren’t hugely exciting. We have got some experience sifting through these rumors – we have been at it for over a decade – and nothing we have picked up suggests anything more than that.

What does that mean? Well, a similar size  and shape to previous launches (with three phones mooted for unveiling at the new iPhone 11 launch) but they will not bring amazing changes just now. That said, Apple’s tagline for the iPhone 11 launch was ‘By innovation only’ with a modernized Apple logo – so perhaps there’s still a surprise or two in the works.

Here is what we are not expecting this year: no 5G in the new iPhone, the Lightning connector to get dropped and a foldable phone. These are all there for the future of the new iPhone, but we are almost certain these will not be part of the iPhone 11 launch – and that could be the point when we see the iPhone Pro, if / when that appears.

What we do know is that the new iPhone 11 will be the poster-child for iOS 13, and we are pretty certain that we’ll be seeing the iPhone 11, iPhone 11 Max and iPhone 11R … what Apple is going to call them remains a mystery though, with there being no obvious next step to the iPhone XS.

You can see iPhone 11 Specs below 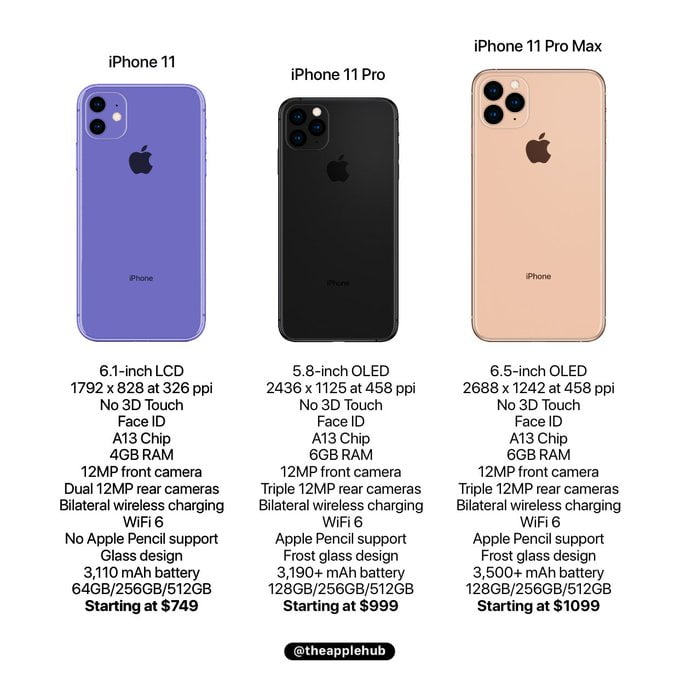 The main change will be that camera upgrade – we are now fully expecting three sensors on the iPhone 11 and iPhone 11 Max, and just 2 on the iPhone 11R – but with enhanced capabilities on each model.

What’s of more interest is whether Apple will be pushing the iPhone 11R (if indeed it does call it that) as the iPhone XR is the phone that is most prominently featured on its homepage – suggesting the cheaper phone could almost be the star of the show this year.

Apple has confirmed its next launch event, and it’s happening on Tuesday, September 10 at 10am PT.

Like every year, we did some sleuthing around the possible iPhone XI release date beforehand, so we always had a pretty good idea when was coming.

This date allows Apple to ship iPhones XI into retail channels well before the holiday rush – as for the new iPhone 11 pre-order date, Apple tends to open this on the Friday following the launch, which will be September 13 by our calculations.

Finally, the new iPhone 11 release date – the day when you will actually be able to get your hands on the handset for the first time – It seems very likely to be a week later on September 20, if previous releases are anything to go by.

And it may not be just the new iPhone range that launches on this date, we may well also get the Apple Watch 5 then too.

The iPhone 11 price is almost certain not to drop this year – especially for the ‘main’ new iPhone. After all, Apple priced both the iPhone X and  iPhone XS starting at $999 (AU$1,579, £999) and without a massive change to the design or functionality, a price hike does not seem likely.

With news that Apple is not selling as many iPhones as it previously forecast, there is a chance the iPhone XI will be priced more affordably – although we reckon a price freeze, rather than a reduction, is a more likely act by Apple.

The new iPhone XIR could be a touch cheaper – depending on the new camera technology. A less-costly iPhone than last year (where the iPhone XR debuted for $749 / $749) could happen unless a lot changes to the hardware… but if Apple goes with the higher-power camera, I think the same price is likely to be maintaine.

The addition of the iPhone XI Pro rumor – which, it has to be noted, is based on a single tweet (one that does have some form in getting the naming right of past iPhones) – would suggest a price hike for the phones.

But given analysts are suggesting that the new phones will ‘lack novelty’, we are not expecting the inflated cost that would bring.

What will Apple call the iPhone 2019? It is a tricky one: Apple has backed itself into a corner with the name. Roman numerals could well remain, but how does the iPhone 11 follow the iPhone XS?

Apple has been staunch on verbally calling the handsets the ‘iPhone X’ and ‘iPhone XS’. With that in mind, the iPhone 11 seems to make the most sense, but then – if the older models remain – there will be an X, an XS and an XI (along with an XR) – and iPhone XI is easier to understand.

That does not easily point to the best, most-desirable model. So could Apple do what has been rumored for years and simply go for the ‘new iPhone’ as the ‘main’ XS replacement, and stick with the same iPhone XR name, albeit with a small spec upgrade?

As mentioned, the iPhone XI Pro could be added to the mix, bringing it into line with its iPads (and indeed MacBooks) in terms of their naming, but we’re rather doubtful of that.

But Apple has already ditched numbered increments for MacBooks, Mac, TV and iPads, so ‘new iPhone’ would be a logical next step – even if iPhone 11 would be the most pleasing thing for consumers looking for the obviously best new phone.

Here is the thing that we think Apple is going to push the hardest this year: unless all the leaks are fake, the iPhone XI camera looks pretty likely to pack a larger, more square lens array on the rear of the iPhone.

This is the only real hardware upgrade we are seeing from Apple this year, with 2019’s iPhone coming with enhanced picture-taking capabilities. Most chassis leaks hint at the same square cut-out portion.

Ming-Chi Kuo – Respected Apple analyst has weighed in to say that one of these lenses might be almost invisible, adding at the same time that the selfie camera will get a boost from 7MP to 12MP.

One source claims that only the iPhone XI Max will have the three camera array, but that seems rather fanciful when Apple made a big deal in 2018 explaining how the iPhone XS Max and XS were almost identical bar the screen size – we expect three lenses on both the higher-end 11 variants and most leaks follow that theory.

What will those lenses be? Well, smart money suggests that there will be 3 12MP lenses: one that takes ‘standard’ photos (with decent low-light capabilities), one zoom lens, and a new wide-angle option opening up a new world of photography capabilities.

That source is suggesting that the third lens on the iPhone 11 will not have optical image stabilization, which would be an interesting move, and that the flash will be even brighter and more useful.

The same source is also stating that the image processor inside will be enhanced, but we had expect nothing less from a brand that’s likely to push the camera prowess as the main reason people  have to buy the new iPhone range.

Apple’s Neural Engine did bring some impressive boosts to the photo quality of the iPhone XS, so another jump forward could continue the brand’s ability to just take photos that, look nice – thanks to intelligent algorithms working out what they’re looking at.

Smart Frame capabilities would add a better way to improve the snaps you’re about to take, but we’re still mostly in the dark about what that would bring at the moment.

A strong rumor suggests that the iPhone 11 will have a feature from the Galaxy Note 10, where the videos will be able to do background defocus in real time – a real Live Video editor.

Elsewhere, we have heard that the iPhone XI could use ‘new’ 12MP sensors, and will offer improved photography, with the three lenses apparently working in coordination in an RGB mode. 1 of the 3 lenses is also said to offer a 120-degree field-of-view.

What about the front camera? Well, there we are going to get an upgraded 10MP sensor (apparently) – but the same suggests that the new iPhone XI will have 10MP and 14MP sensors on the rear, which seems unlikely. Even that, an upgrade to selfies would be a welcome addition.

A laser-powered 3D camera was also supposedly destined for the new iPhone XI, but it seems more likely that we will see that on the iPhone for 2020 (if at all), in a bid to really show off the new iPhone is augmented reality (AR) capabilities.

Sadly, the notch looks like it will be staying the same size – even though the camera tech is shrinking down, as a source says the notch is staying the same this year. This aligns with rumors that the phone chassis is not changing size, so does make sense.

View all posts by Thanh Tung